On the 27th of August two new compositions were performed in Rozebroeken park in Ghent.

My first composition Open Fields is meant to be performed in a big, open space. Three musicians are located at a large distance from the audience, three others sit near to the audience while one musician is at an intermediate distance. This work continues the 20th century tradition to exploit the location of performers in a music performance.

The second composition is Beving Rozebroeken (Bebung) and the main (instrument) part – called BEAT in the score – requires multiple performers to beat on plants and objects (trees, stones, water, park benches, garbage, bicycles, etc.) situated at the concert site or characteristic for this place. This part was performed by nine musicians, six amateur performers from the neighborhood included. Three additional performers sporadically played melodic and harmonic material in the high register, pointing at the presence of birds in the park. The use of garden tools (as percussion objects) made a reference to the history of the park as community (vegetable) gardens (‘volkstuinen’ in Dutch).

In both works I try to obtain an auditory transparency: the music should not only draw attention to itself but also to the surroundings. During a concert the audience should not only hear the music, but also experience and learn about the concert environment. The work Exposure, 2010 by Anthony Gormley is a powerful example of such transparency in the visual arts: if you look at this 60 ton sculpture in The Netherlands, you cannot avoid seeing both the art work and the location (landscape). 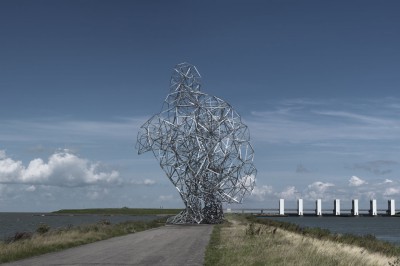 – regularly sitting outside while imagining and designing the music during the creative process
– adding rests or providing enough sections with very soft dynamics to ensure that surrounding sounds come to the musical foreground; I imagine that I am not composing an autonomous piece, but only one voice of a polyphonic whole;
– exploiting general characteristics of environmental sounds (and not imitating specific environmental sounds).

These characteristics are spatialisation (sounds coming from different directions and altitudes), mobility (sounds and the performers are moving), diversity (sounds are not only produced by musical instruments but also by beating on objects, buildings and plants at the concert location) and imprecise and unstable intonations (site-specific objects with unstable or imprecise pitches are combined with the ‘musical’ instruments playing fixed pitches). The last two characteristics were only applied in Beving Rozebroeken (Bebung).

Transparent music and awareness for the surroundings is not a purely musical issue. I also gave a short explanation to the audience, stressing this transparency and the difference with the usual concert ritual in a concert hall. The absence of a stage helped the audience to focus on multiple sources and an overall experience.

I didn’t make one overall score for Beving Rozebroeken (Bebung): there is a (more or less) traditionally notated score for 3 instruments and a video score for the BEAT part. The video score (an mp4 file) was played back on a mobile phone or tablet by all the performers moving around on the performance site and beating on the site-specific objects. This video score had a list of simple (text based) instructions changing in time. In the future I want to omit the traditionally notated instrument parts and only make a text score with general instructions on how to prepare a performance and make a video score. This would make the piece and the rehearsal process more adaptable to different locations.

This is a short video fragment of the performance of Beving Rozebroeken (Bebung): it was evening in the park and in this fragment a performer is beating on a tree while later on, the camera films another performer playing on a large, wooden climbing frame with a rubber hammer.

You can find scores and recordings of both compositions on my website.