Composing with the neighbourhood

In January 2017 there was a performance of my Music Street composition together with the neighbourhood committee De Biekorf. Music Street is a live soundscape that wants to create a full experience of the diversity in a neighbourhood. This is a very short summary of the work:

You can find more information, the score, documentation and recordings of Music Street here. In this post I will focus on the artistic and compositional challenges of such a site-specific and participatory project. 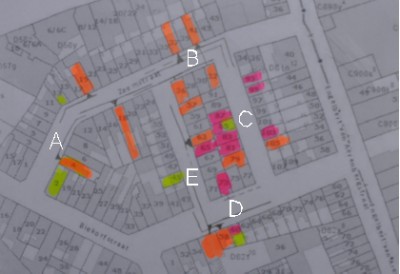 The illustration shows the street map, a few weeks before the first performance of Music Street, when I was acquainted with the majority of the participating houses and musicians. This map was the starting point to design the musical structure for the composition. The letters indicate the spatial sections of the trajectory. In the pink houses the inhabitants were also musicians, therefore the instrumentation and spatialisation was fixed at these places in the trajectory. The orange houses were guest houses, the inhabitants were not musicians and other local musicians could play from these houses. [The yellow houses stand for people that were probably going to participate.] By linking the local musicians to a specific guest house I could enhance the diversity in instrumentation, loudness, spatialisation and music styles and thus build a musical structure. This structure was created by fixing the walking trajectory, which was A→B→C→D→E→B→C. The beginning A was quiet, with less musicians in this section. In C there were more performers and a first climax was built up. Next, there was a second, quieter part in E (with less and softer instruments), leading to a final climax in C. Here I arranged that the largest ensemble (five accordions) played from two houses across the street and over the heads of the audience. (The second illustration shows the trajectory a few weeks later, on 21 January; all the instruments in the houses are indicated.) 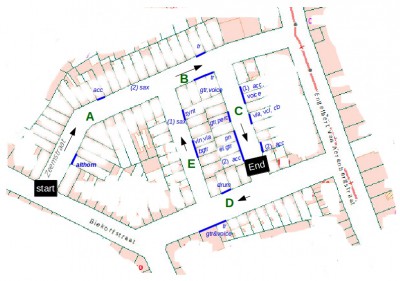 As in other polyphonic music, I composed and worked with timing, orchestration, spatialisation and timbre of the sound layers, but the method, possibilities and restrictions in my creative process were different compared to a composer (Henry Brant for example) making a concert hall piece. The variety in instrumentation and timbre was larger than in an orchestra, but I had to find and convince the musicians of instruments such as didgeridoo or synthesizer in the neighbourhood. The possibilities to place the performers at different locations and exploit the spatialisation were also very large. The first performance had musicians in entry halls of houses, windows at the first floor and parking lots, but again, I had to convince enough house owners. Moreover, in some cases a musician’s location couldn’t be changed because the instrument was too heavy (e.g. piano) or the musician lived along the trajectory of the parade. I also couldn’t control the timing of the separate ‘voices’ in detail (compared to e.g. a polyphonic baroque composition) because of the large distances between the performers. But I had some control on the timing of the sound fragments that the performers had chosen to play. I gave them simple instructions to play before, during of after the parade had passed by. While doing this, I also had to take the different levels and the performance pleasure of the amateur musicians into account: playing a half-minute piece is appropriate for a beginning musician but probably too short for an experienced musician.

Just as a composer creates a digital soundscape in a studio, I balanced, mixed, controlled the timbre and loudness of separate voices and spread the sound in space (‘panning’). But I didn’t work behind a computer screen but together with a neighbourhood. This implied more organisational, social and artistic work outside on the street. Compared to a soundscape playing through speakers, I didn’t have an equally detailed control of some musical parameters but in the end the listener was really walking around in this soundscape and had a multi-sensorial, holistic experience of the neighbourhood in which listening, seeing, feeling and knowing were mixed.

Composers have always operated within a socio-cultural field that gives them opportunities and restrictions. This also happens in contemporary-classical and experimental music, where commissioners of new works play an important role (see the articles of researcher Annelies Fryberger). Often tradition and habits make this field ‘invisible’ but composers do accept that commissioners restrict the instrumentation and duration or agree that the character of the new work should correspond to the profile of the concert organizer. It may seem as if I barely had artistic possibilities in the collaboration with the neighbourhood in Music Street: the performers chose their music fragments and I (almost) didn’t write ‘a note of music’. But in fact, the field of possibilities and restrictions only moved and changed, when I was making this site-specific, participatory work. And, as you may have noted from this text, my previous experience in polyphonic composition proved to be an aid and enrichment in the elaboration and organisation of Music Street together with the neighbourhood committee…