Stephen Montague is an American composer, living in the UK since 1974, who has made music for a long list of internationally acclaimed orchestras and festivals. Although he is more known for his compositions for ‘conventional’ instruments and media, he has also regularly worked outside the concert hall and produced so-called ‘large-scale works’. Concertos for an orchestra of automobiles or music theatre works in a Scottish castle are the result of his search to expand the realm of music beyond artistic institutions. Having worked together with John Cage to realize versions of Musicircus, he has continued to direct and conduct realizations of this work throughout Europe.

HR: The most recent large-scale piece that you have made is “A Brew Dog Howls”, made for a Scottish craft brewery.

SM: Scotland, unlike the rest of Britain, still has some money for the arts, though it’s getting smaller. In 2014 the Aberdeen Sound Festival commissioned a group of artists, poets, actors and musicians to do a number of very interesting projects by going into communities around the greater Aberdeen area and work with local artisans to produce a one-off event for the festival. A cheese factory, for example, worked on a cheese, food and poetry project. Other small craft specialists worked not only with poets but with artists, actors, and musicians. My assignment was the BrewDog Brewery, a small, craft brewery in the village of Ellon, about an hour and a half north of Aberdeen. BrewDog recently became famous in Britain and now internationally for its extremely strong beer and clever advertising. I was their composer-in-residence for two weeks working with the special brewery fraternity – all men, lots of hops, and many empty glasses.

Each of the Sound Festival artists employed on the scheme was to devise a unique project that embraced not only the local artisans but also engaged their local communities. As the finale of the 2014 Sound Festival the organizers hired a coach to take an audience from Aberdeen on an afternoon/evening tour around each one of these locations to sample the local fare and be entertained by the completed festival project. BrewDog and I were the last stop no doubt because it was a brewery and what better way to end the tour. Working on this project for two weeks was an alcoholic’s dream- work all day, drink all night. And all special craft beers!

My new work was called A Brew Dog Howls. And for it I harnessed most of the brewery’s facilities. Scotland doesn’t enforce the same health and safety standards England imposes so I could actually have the whole audience walking through the maze of vats, kegs and pipes in the working brewery. It was no doubt dangerous but certainly wonderful and exciting. I also found that one of the brew masters played bagpipes! How perfect was that! I added percussion when one of the brewers built an amazing percussion tree using various pieces of scrap metal, tubing, pipes and cans culled from brewery stock and the junk yard. The poet Isobel Dixon was on the team and created a special poem using the colourful names of BrewDog beers like “Coco Psyho”. I also hired two professional musicians for the performance just in case. The audience was a beer bottle chorus charged with creating rich harmonic drones by blowing across the bottle tops after each sip of beer. 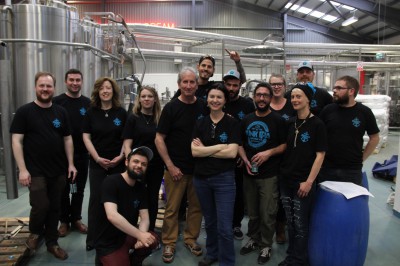 The festival coach arrived at the brewery in the early evening. I rehearsed them to coordinate their drinking style with their blowing technique- they were better at drinking. The event began with Isobel’s poem delivered by an impressive Scotsman. Twelve brewers played the percussion tree with great panache, the professionals kept the momentum sharp and focused, the audience beer bottle drone worked elegantly, and the bag piper appeared dramatically weaving through the vats at the finale. The BrewDog Brewery came to life as never before. It was exciting, dramatic and fun.

Sadly however it somehow felt like it came and went too quickly and with barely a trace. After two weeks of methodical preparation it was suddenly gone like the wind. Ellon is an isolated community and certainly nothing like this had happened there before. The audience seemed to enjoy it thoroughly but only in the moment. As soon as it was over they were back in the bar drinking as though nothing had just happened. I was surprised too that BrewDog who have done some amazing advertising campaigns like driving an army tank through the village streets of Scotland took no notice of what had just happened on their own brewery floor. Few photos, a little documentation. And Hans, you are the first person to ever ask me about this event since it was done in 2014. I had nearly forgotten all about it. There were bigger and better fish to fry coming up.

HR: What makes your large scale works different from your other compositions?

SM: If I tell you that the last big commission I did was a 40 minute orchestral work for the Birmingham Royal Ballet, there is quite a difference between men in tights and women on point in a major London venue than what I do with an orchestra of automobiles at Brands Hatch race track. One of the things which I think has been difficult for me as a composer is that nobody really knows what to call me because I can write proper orchestral music for the Royal Ballet, but I also do crazy works for motorcycles, automobiles, music circuses, breweries and various projects like that. My favourite quote is what Henry Cowelll said about himself that he wanted “…to live in the whole world of music, not just in one corner”. And that would be my philosophy too. I like being able to do everything/anything. I’m interested in lots of different things. It is fun to both do a work for motorcycles but also a large orchestral work for the Royal Ballet. I thoroughly enjoy doing both. 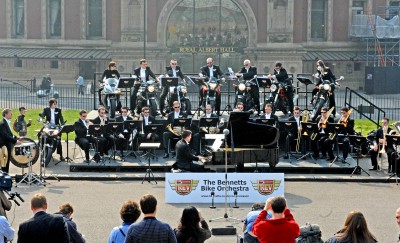 HR: Has your practice as a conductor been informative for your large-scale works? It is a special experience to conduct somewhere outside or in a brewery.

SM: Conducting outside can be fun in the sense of more adventurous and probably more problematic than conducting an orchestra in a controlled environment. They both present very different and certainly challenging issues. Outside of course it’s often just plain weather and the zero acoustics of an open space. It takes a different kind of preparation, and rehearsal technique which is always tricky. If you do a Musicircus with over 100 performers in a space inside or outside which is large and cavernous, employing the ‘right’ amount of performers for the space and acoustics is not an easy call. You want to have enough performers, so that their sound resonates but not too many so it becomes congested. That’s a real challenge to get it right and it takes a lot of practice and experience to make it work well in large spaces.

SM: Absolutely. It is a very different experience but at another level it is like an inside concert- it needs to have a beginning, middle and an end so to say. It needs to be long enough and not too long. It has many of the issues that you have in the concert hall but on a larger, usually more difficult scale. When you are in a concert hall you know what will work and what won’t work- the orchestra or ensemble fits on stage, etc. When you are on a windy hill the issues can be much more catastrophic- the music blows away! All these things are very different inside and outside but the final effect is that you want to have the audience really enjoy it and get something from it. It is a big challenge but it is much more fun when it works well to do something outside a normal concert setting.

(This interview happened via Skype in October 2017 and was revised through email correspondence with the composer.)